​A DEEP, HORRID MYSTERY IN SIBERIA 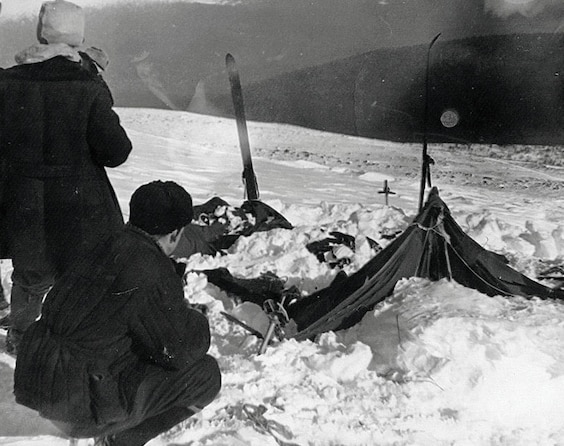 (Please note that below and here is log-in for new system. You enter username first (which is your e-mail) and then your password, just this once. Reset it if  you forgot. Please be patient; we will help anyone who has trouble.)

Perhaps you’ve heard of it.

The story reduces to this — and yet reduces to nothing: Back in 1959, a group of nine hikers from the Ural Polytechnical Institute died in the northern Ural Mountains under circumstances that have baffled investigators ever since. There were no clear signs of a natural disaster or foul play.

Simply put, experienced hikers had established a camp and in the dark of the night someone or something caused them to cut their way out of their large tent in a panic and trudge away from it in subzero cold (minus 19 Fahrenheit) without adequate dress — some barefoot or in socks, and only long underwear, despite heavy snowfall. They were later found scattered amid the slope’s pines, snowfall, and trees, four next to a creek, one missing her tongue, eyes, part of the lips, as well as facial tissue and a fragment of skull bone, while a young man had both of his eyeballs missing and a third no eyebrows.

Investigators hurriedly judged that six of the hikers died from the cold (hypothermia) and the three others from physical trauma. They said the force that injured them (there were cracked ribs and a fractured skull) was some “compelling” force — though, until last summer, they never declared in a official way what that force was.

They now claim it was something many had previously discounted: a strange sort of avalanche that caused them to flee. Those who dismiss the official explanation cite conditions in that area that are not prone to such an event, and pointing out that while they left in sort of a hurry, it wasn’t in the sort of panic that an avalanche would cause.

But why did they leave — under circumstances that, as experienced hikers, they knew were tremendously dangerous? What made them leave behind neatly folded clothes and half-eaten provisions? And the cut in the tent: what caused them do that? Were they trying to sneak away from something?

What might that something have been? The photo above may hold a key.

It is one of many mysteries in the Arctic and woodlands to the south (including Alaska), where yet greater mysteries, some spiritual, many of them bizarre, abound. They are the subject of this “special report.” Haunting, to say the least.

BECAUSE WE'RE SWITCHING TO A NEW, BETTER SYSTEM, YOU'LL NEED TO RE-ENTER YOUR USERNAME AND PASSWORD OR CREATE NEW ONE ('PASSWORD RESET') JUST THIS ONCE (IF YOU HAVEN'T ALREADY)!