A number of times I’ve written about places that are supposed to be havens for strange spirits — in a word, “haunted.” Yes, it’s that time of year again! (We’ll get to prophecy next month.) In this vein, and for this report, I want to zero in on demonic hotspots. 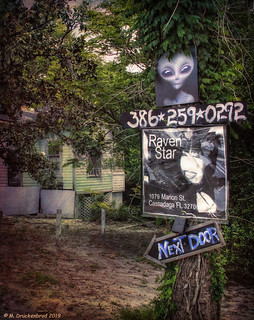 Recently I toured a camp of bizarre “spiritualists” called Cassadaga near Orlando for this report — an actual hamlet of occultists. It’s not to be trifled with: While it may seem hokey, with signs advertising psychics, mediums, healers, crystal-gazers, and channelers (following a strange “religion” called Spiritualism that bases its religious services on contact with the dead, especially Indian “spirit guides”), those who live here — there are about a hundred residents — are very serious about what they do or think they are doing.

One is witch Raven Star, whose house has a statue out front of a skeleton with the head of an alien riding a winged horse (the “divine” pagan creature Pegasus, offspring of Poseidon, I guess) and a distinctly dark aura (as does most of the town).

When I say “serious,” you can feel the oppressive energy. You can see the darkness. While the sky around Cassadaga was clear and mostly bright when I visited, dark clouds literally hung over this old, disheveled place and trees along a nearby highway are bent from hits by multiple hurricanes.

This camp is known for its violent, extraordinary lightning — and also for allegedly having a bench in a wooded area near graves where people supposedly sit and make their wishes known to the devil (“Seat of Satan”; people at Cassadaga deny it).

I blessed my car with holy oil and we drove through without getting out, saying a Rosary. No use bringing spirits home!

Creepy place. I’ve been to my share. I’ve looked at haunted situations since I was a cub reporter in the mid-1970s (though now at much more of a distance). The point of bringing them up — and of this report: All present dangers. If you think going to a medium or fortuneteller is just for fun, you may sorely regret that naivete. Stay clear. As I’ll mention, I also encountered a powerful haunting at a huge abandoned sanitarium in the Midwest — where the Virgin Mary allegedly had appeared! A year ago, I did a special report on a severely plagued house in Pennsylvania.

But what’s the most haunted “haunted” place I know of in America? The most hazardous?

No, it isn’t the community of Spiritualists. Nor is it any single house.

The most powerful and dangerous places with which I am familiar are ranches out west.

That’s what I’d like to discuss in this “special report”: the incredibly intense phenomena attendant to a couple of ranches in Utah and Arizona that have displayed the entire array of phenomena, and that, for reasons you will see, I would strongly advise people against personally investigating.